I own an MSP430F5529 USB launchpad from Texas Instruments. Cheap in cost, this launchpad is a good resource for developing your USB applications. It has an open source onboard debugger eZ-FET lite.

For developing applications for MSP430, there is already a well maintained C toolchain(gcc-msp430) available. On an Ubuntu/Debian machine, you can install it using the below command

For debugging purpose, I am using mspdebug. But I had some hard time in setting up this debugger on my GNU/Linux machine. Due to some driver issues, the default mspdebug package from Ubuntu repository didn’t work. To get it working, there are some extra packages provided by TI to be installed.

Another alternative was to get the pre-compiled mspdebug from Energia. Energia comes with all these issues solved. But if you want to try the hard way, refer this.

Below steps describe how to use mspdebug from Energia

2) Extract the tgz file. I got a folder named energia-0101E0011. The number in the folder name might change for you depending on the energia version you are using.

If you were successful, you will get the mspdebug console

Now lets write a small code and see if we can flash it to the launchpad.

Save the below code as blink.c

Lets compile this software using the below command

We need to flash the output of the above compilation to the launchpad. Launch mspdebug using sudo ./mspdebug tilib. Then run

Note: Since mspdebug is inside the energia folder and this blink.c file is at another location, when using the prog command in mspdebug, you have to give the path to the a.out file i.e

Now the LED on the launchpad will start to blink!


If you haven’t installed Migen or don’t know about Migen, read my previous blog post Installing Migen – the Python based hardware description language 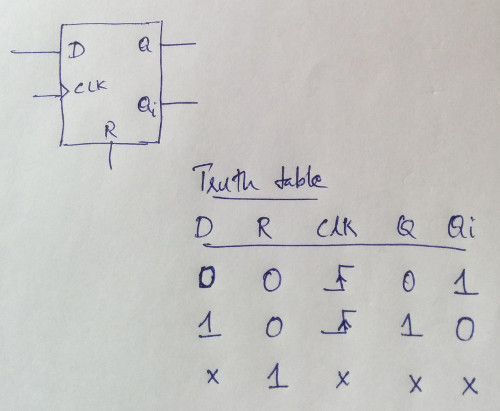 A D flip-flop spits the data out which is kept in the data input pin when the clock is applied(in positive edge or negative edge). The D flip-flop that we are going to design has the input pin D, output pins Q and Qi(inverted of Q). It also has a clock clock input and a reset pin which makes the flip-flop synchronous.

Just for a reference, this is the datasheet of a D flip-flop IC.

Create a file named Dff.py and add this code to it.

Q.eq(D) equates/copies the content of D to Q which are the input and output of our flip-flop. This is then assigned as a synchronous using self.sync +=. As mentioned before, a D flip-flop copies the data from the input pin to the output pin in synchronous to the clock transition. Hence this circuit is a synchronous circuit.

Qi.eq(~Q) is used to invert Q and copy to Qi. This is assigned as a combinational logic. This means Qi is independent of the clock. But out flip-flop is a synchronous. This doesn’t means that Qi will change asynchronously since the input of Qi is from a synchronous logic Q.

Update your Dff.py with the below code.

Execute this python script using the below command. This will generate a Dff.vcd which contains the test result. The vcd file can be viewed using GTKWave tool. 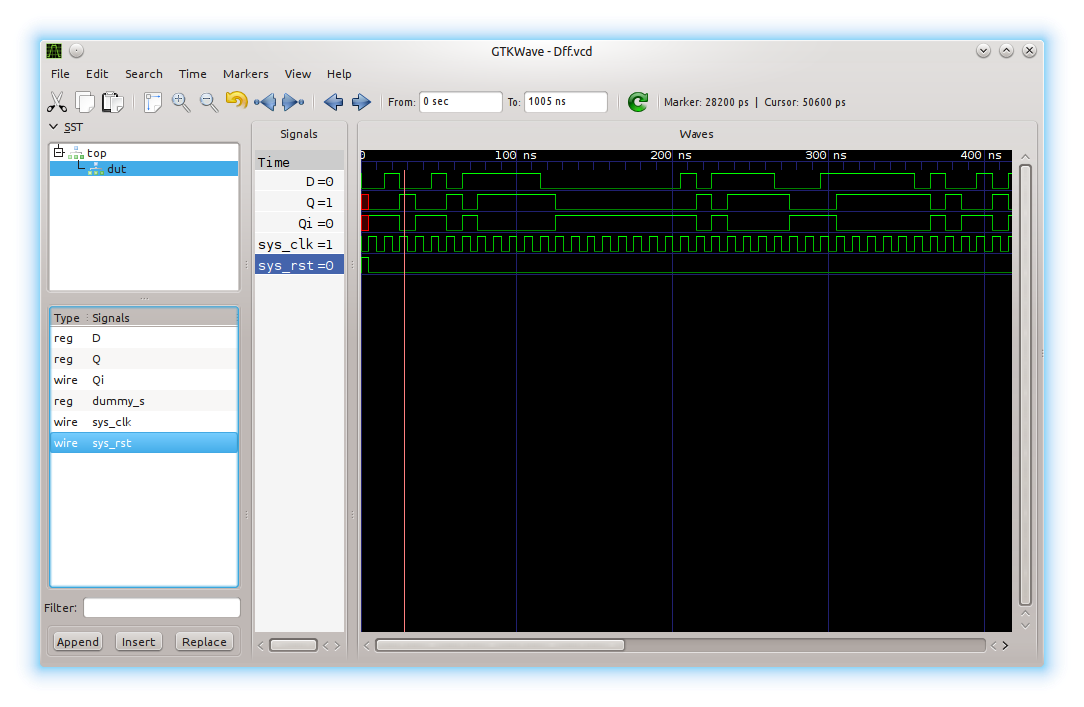 As I mentioned before, read the official Migen user guide and tutorial to understand what the code means.

To test the D flip-flop, we need to check if the input (D) is copied to the output(Q and also Qi). For this the input D should be fed with values(0 or 1). We can use the module random in Python to generate some random values.

The function randrange(2) generates a random number – either 0 or 1. s.wr writes the random number to D. The write happens only after the positive edge of the clock cycle.

Verilog equivalent of the D flip-flop

As I mentioned in my previous blog post (Installing Migen – the Python based hardware description language), Migen converts the Python code to equivalent Verilog code. Since the FPGA tools which we currently have only understands only Verilog/VHDL, this is required. The generated Verilog code can be loaded to your FPGA vendor’s software and verified on real hardware. Mibuild(a tool inside Migen) supports few FPGA vendors for which you don’t have to manually paste your Verilog code to the FPGA vendor’s software. Mibuild will do it for you(by accessing vendor tools via command line) and even it can load the bit stream file to FPGA. Usage of Mibuild will be explained later.

Uncomment the line in your Dff.py file and run the python code again. This line will print the Verilog equivalent code of our D flip-flop.

Below is the Verilog output.

Another way of testing D flip-flops: A frequency divider

Note: Below shown is not the right way to do a frequency division. This is just an example to show Migen’s testing capabilities.

A D filp-flop can be used as a frequency divider (frequency / 2). Read this for a more clear explanation. Make a connection from Qi to D to divide the frequency(fed to the clock pin) by 2. Connecting a wire between pins is very easy in Migen - just use the same Signal() for both the pins.

Create a file named Dff_Divider.py and add the below code.


Migen is a Python tool which helps you to describe hardware(like Verilog and VHDL) in Python langauge. Like a C compiler which converts C language to assembly, Migen converts Python code to Verilog/VHDL statements. Migen helps in describing hardware in a more Object-oriented manner which would be hard to realise in Verilog/VHDL. A free and open source project (https://github.com/m-labs/migen), Migen is also used for designing the SoC (MiSoc) of an open source hardware project Milkymist One.

Migen toolset contains the Migen itself, the Mibuild and the simulator. Migen converts the Python code to Verilog/VHDL. Mibuild is for converting the Verilog/VHDL code to bitstream file and transfering to the FPGA. If your FPGA is not supported by Mibuild, you can add support for it or you can paste your Verilog/VHDL code to your FPGA tool. The simulator just integrates Migen with Icarus Verilog for simulation. Simulation requires a test bench which is also written in Python. I will explain here how to install Migen and the simulator. Installing Mibuild will be done later(once I get my FPGA board).

Though there exist a tutorial about installing and using Migen, I faced some problems while installing in my Ubuntu machine which was not as per the tutorial. After reading this post, I would recommend to read the official tutorial from the Migen page. This will provide some more clarity. Also make sure to read this post complete before proceeding on your machine.

1) Make sure you have installed Python3, setuptool and git. On an Ubuntu machine this can be done using the below command

2) Get the Migen tool to your machine

3) Move into Migen folder and install

Note: There is an option to use Migen – without installation! Just you need the project in your machine. Show the path to Python so that next time when you import Migen modules, Python will search those paths. For this you don’t need the python3-setuptools mentioned in Step 1. Clone the project to the machine using Step 2 and then run export PYTHONPATH=‘pwd‘/migen

Now the simulator installation. Once you are inside the Migen folder(cd migen), move into the vpi folder using cd vpi. We need to run the make file inside the vpi folder. But before that there are some more things to be done.

1) Install Icarus Verilog which is the actual simulator. Also the simulator generates a wave dump of the simulation which can be viewed using GTKWave.

2) Run the following commands inside the vpi folder to install the Migen simulator.

You might get an error while running sudo make install. In my machine the error was

install: accessing ‘/usr/lib/ivl’: No such file or directory

This might be beacuse the path were Icarus Verilog is installed might be at a different location. A peak into the Makefile and also to the error can give you some hints on what to search for. I need to find where the ivl folder is. For that I used the find command find /usr/ -name ivl\*. I have to pass the new found path (/usr/lib/i386-linux-gnu/ivl) to the make install command. Run the following to install

Thats it! You have successfully installed Migen and its simulator.

There is another tutorial about Migen. Read it – Designing a D flip-flop using Migen


Recently I was not able to login to my wordpress account. If I visit my wp-login.php page, I was getting a 403 error. Initially I thought it was problem with my wordpress installation but it was not. The error was because of a brute force attack on the wordpress login pages. My server was blocking access to this page. Lot of people are facing this problem. So I thought of blogging. There are plugins to block this attack. But they can only be installed and activated once you are able to login.

Below is the solution for the wp-login.php issue which I found from internet. My initial target was to login. The quickest solution was to rename wp-login.php to a new file name and also replace with the new file name in the renamed wp-login.php file. In the following link, you will get the details how to do http://wordpress.org/support/topic/wp-loginphp-change-to-your-custom-url. This is not a recommended method but a quick solution to get a login.

Once you login, you can search for wordpress security plugins. Some restricts the number of login, some hides the login page. Search and install which one you found better. I am using Better WP Security. Once you enable your security plugin, I would suggest to revert back to file name wp-login.php and also replace inside the php file.


STM32F4Discovery examples for GCC on GNU/Linux

I don’t plan to write again a toolchain setup instruction for this board. You can install toolchain and flash tool as per instructions provided in the below link

While installing the toolchain I got an error zlib.h: No such file or directory. On a Debian system you can remove this error by issuing apt-get install zlib1g-dev

As I mentioned above, the summon arm toolchain will also install libopencm3. libopencm3 generates some header files during installation. These header files needs python yaml support. The build might stop because of this. You can fix this issue by running apt-get install python-yaml

1) http://jeremyherbert.net/get/stm32f4_getting_started This link uses the examples from proprietary firmware library of ST.