One of the best ways to gain some good understanding about a concept is by doing experiments rather than reading theory about it. Multitasking in operating system was one such concept for me. In the beginning stages of learning C programming, I used to wonder how operating systems were implemented. At that time I knew that operating systems were written in C language but never knew how.

What is multitasking, scheduling and context switching ?

Mutlitasking is a method where a CPU does multiple jobs at the same time. If you have programmed microcontrollers in C, you would have written a main() function inside which you put what you want the CPU to do. What ever you write inside it will be executed line by line by the microcontroller. Just imagine you have written a program to blink a LED and also to send data via UART inside a while(1) loop.

Here the microcontroller will first blink the LED, then it will stop blinking the LED, then it will send data via UART, then stop sending the data, then again it would start blinking the LED… and this process goes on. But what if you want both of these to be executed in parallel i.e blink LED and in parallel send data ? Yes, this is possible. This is way of doing multiple tasks at the same time is called as multitasking. You can read more from here http://en.wikipedia.org/wiki/Computer_multitasking. The multitasking scheduler which I have written here is preemptive.

Which task should be executed next(i.e to be context switched) is decided by the scheduler. Once the time has reached, the scheduler will trigger a context switch. Scheduler gets support from a timer to trigger the context switching i.e if you want to switch between tasks every 1ms then the timer is configured for 1ms. Every 1ms a interrupt will be triggered which will call the scheduler.

But how to do this ?

A CPU does manipulation on the data stored in its registers. When you write a C program, the C compiler will generate assembly instructions to manipulate data on these registers. In some cases when you write large programs, the available registers wont be enough. In that case, stack is used. Extra data are stored in stack and when required will be moved to registers for the CPU to use. If you want to know how a C code uses the CPU registers and stack, read these links

So data stored in CPU registers and data stored in stack are very important. If you have multiple task, you need to divide the RAM to those tasks. E.g. If you have 4kB of RAM, you may divide it to 1kB per task. Some RAM is also required(in our case the leftover 1kB) for scheduler, initialisation routines etc.

When we write a C program for our microcontroller, there is a main loop where we write the task for the CPU. Just imagine we have two functions (as I said when I explained about multi tasking) which needs to be executed in parallel. C code that we have written will be executed line by line one after the other. But if we have a scheduler which could do context switching, then we can achieve parallel execution.

As I said before, inside the main() function whatever we write will be considered as a single task. But while implementing scheduler, we will write our scheduler code inside the main() function (and also partially inside timer interrupt service routine which I will explain later). Tasks which have to be multi-tasked should be written as separate functions. In order to context switch at particular intervals, a timer should be configured. In the timer’s interrupt service routine we should write the code to switch to the next task. Before switching to the next task, we must backup the values kept in the CPU registers and stack so that next time when this old task again comes, we need to load back these values into the CPU registers and stack. The function address will be loaded to the program counter so that the CPU will execute that function. 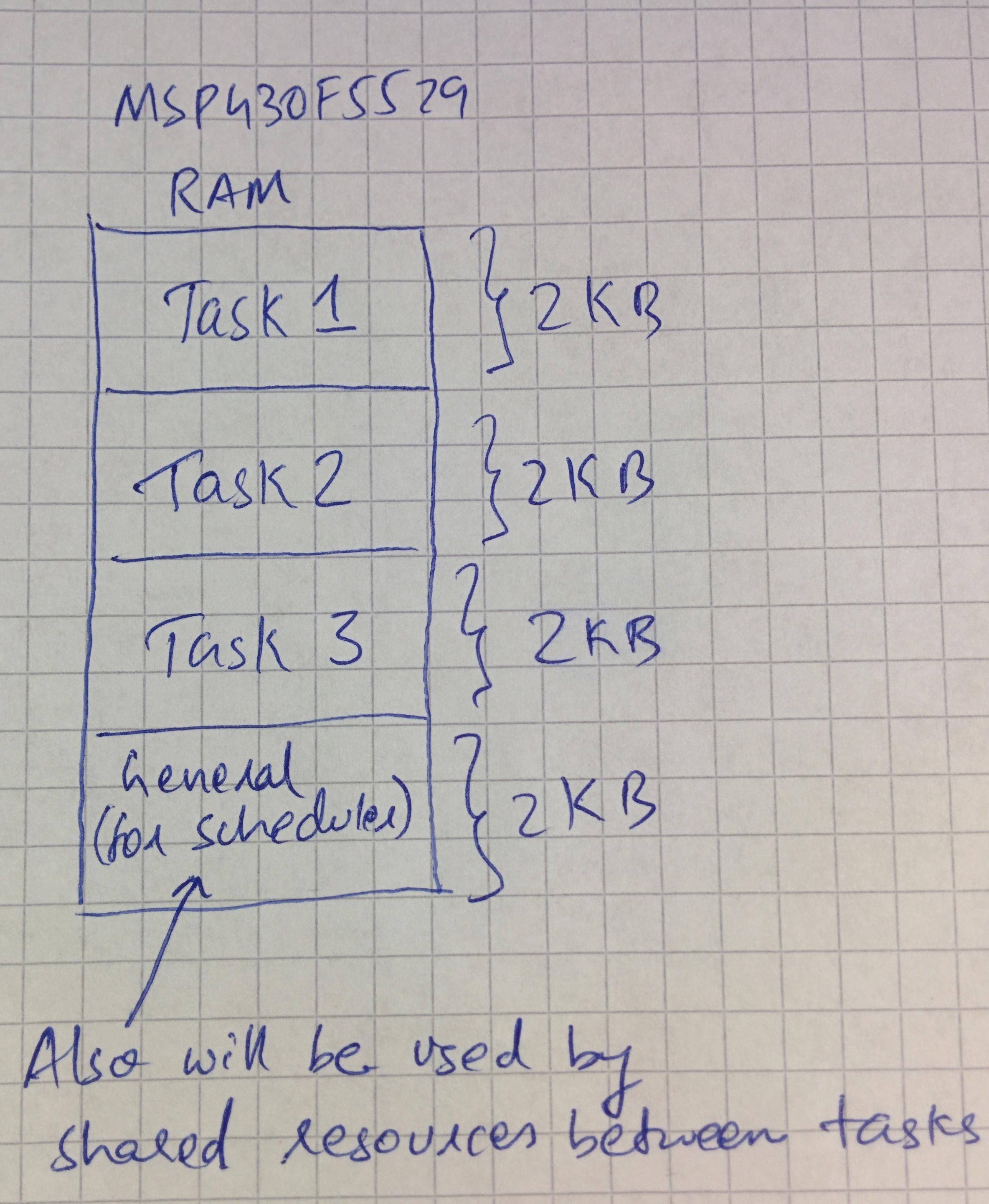 MSP430F series uses 20-bit address space. Some other MSP430 series has a 16-bit address. So if you want to migrate it to such architectures, make sure you make necessary – The extra 4bits in addition to the 16bits are stored along with status register(SR) which needs to be corrected. My scheduler is currently designed to run on MSP430F5529 Launchpad. It can handle upto 3 tasks(but we can alter it as required). Tasks will be switched in round robin way. MSP430F5529 has totally 8 kB of RAM out of which each task will get 2kB and pending 2kB is used by the scheduler.

Before doing the scheduling, we need to do certain initialisations. First we need to switch off the watchdog timer. Then we will clock the CPU to its highest frequency so that it runs at its best speed. Then we have to initialise the RAM(I will explain this in the below paragraph) for each task. The watchdog timer will be used to call the scheduler periodically. It needs to be configured in timer mode(otherwise each watchdog interrupt would trigger a CPU reset). The watchdog timer will be automatically enabled when we load our first task for execution. After all these, we are ready to load our first task. For this we have to load the stack pointer(SP) with the first tasks initialised RAM. After this the watchdog timer will be enabled and also the CPU will start executing the first task. In between the interrupt will be triggered when the timer has elapsed. This will call the scheduler which has to first save the current CPU registers, then has decide which task has to be loaded next and then trigger a context switch.

RAM initialisation and context switching are the most trickiest part since you need to know the hardware well. I will first explain about RAM initialisation. As we know for the CPU to execute, there are few registers it requires (i.e R0 to R15). These register should be filled with proper values for attaining code execution.

Once the task has started execution, the CPU will automatically increment the program counter(PC) register. So each time when we come back to a task after context switching, the execution is continued from the location where the task had reached. We wont start from the beggining of the task each time. During RAM initialisation, we didn’t store the pointer stack(SP) in the stack along with other registers. This is stored separately. When a task was executing, it would have pushed some values into stack. Stack pointer(SP) register will have that value. While context switching we will save this value so that next time when we come to this task, we will again load this value to stack pointer(SP) register so that the execution is resumed from the place where we stopped.

Enough talk! Show me the code!

I have checked in the code to my github repo. Its an completely open source scheduler. Feel free to use it and learn more. I have made the code self explanatory. Enjoy!

If you want to debug your code, read this – Debugging with msp430-gdb using mspdebug as gdb proxy

Comments can be emailed or tweeted to me. I would like to hear them and will try to reply.